“No Graveyards; that bothered Anna. People died. Unless you ate them, burned them or mailed them to a friend, the bodies had to go somewhere.” 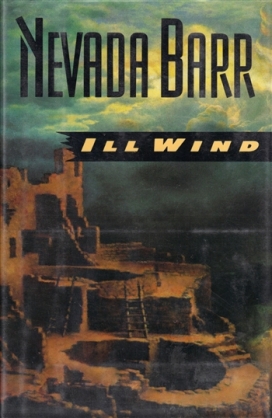 Anna Pigeon works for the National Parks Service, and is transferred from one location to another every so often. In Ill Wind, Anna has left Lake Superior and returned to the southwest, where the first book in the series was set. This time instead of Texas she is in Colorado at Mesa Verde with it’s Anasazi cliff dwellings. There’s some furor about the ditch a construction company is digging across part of the park, those who would like running water very much in favor, those who feel disturbing the soil of the ancient dwelling area bitterly against.

Of more concern to Anna are the carry-outs that are occurring with regularity. Children with asthma and elderly visitors are overcome by the dust and altitude and have to be carried out by rangers or fire crew. When one of these children dies unexpectedly, concern grows. A second death, this time of a ranger Anna was close to, and then an attack on Anna during late night patrol increase concern and draw the reader into considering possible theories, suspects and motivations.

Barr is good at creating twists and surprise villains. Though I figured out “who dunnit” halfway through the book, although the motive escaped me until nearer the end. As a matter of fact, if I have a problem with this book at all it’s the weak support Barr gives the motive, as if she thought up the rest of the story and then when she got to the point where she had to come up with the reason she used the first thing that came to mind. Maybe there were pointers that I missed. Whatever, I’m not convinced the villain would have done what was done, but that’s okay, I enjoyed watching Anna in action anyway.

Also making an appearance in this book is Fredrick Stanton, the FBI agent who Anna worked with, not always happily, in the previous book Superior Death. He’s a character I like so I was glad to see him here. In spite of my qualms qith the motive in this one, I like the Anna Pigeon and these books – especially Superior Death – and I’m still taking one off the shelf now and then. If this is a series that you missed, you might give it a try. The varying location of each book is a real plus, the Pigeon character is solidly written and likable and Barr only gets better as the series continues.

Enjoying life in Portland, OR
View all posts by Rick Robinson →
This entry was posted in Friday Forgotten Book, mystery. Bookmark the permalink.