It sounds crazy, but I thought I’d already posted this, so it sat in my “drafts” folder for way too long. Sorry. Here it is at last.

With this post my sharing of a close-up look at the art my pal Carl Vincent picked up for me at Spectrum Fantasy Art Live 2 comes to the end. Here are the last two items, the largest and with the exception of the print titled “Relic” and the one of Red Sonja, from the first post, probably my favorites.

Here is the largest piece I got, which is the cover art for a forthcoming book. 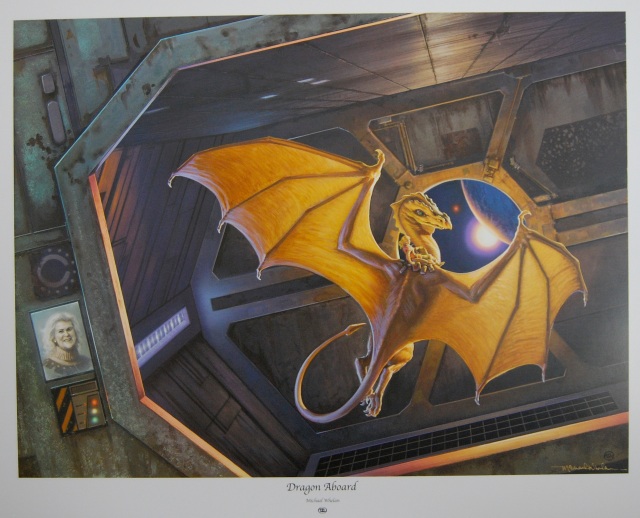 “Dragon Aboard” is Michael Whelan’s painting for the cover of Dragonwriter: A Tribute to Anne McCaffrey and Pern which is due out in early August. The scene is one from All the Weyrs of Pern by Anne McCaffrey. The scene takes place about two-thirds of the way into the book and is based on a preliminary study Whelan did for that book. This painting and a limited number of signed prints were unveiled at SFAL2.

Who doesn’t like dinosaurs, science fictional scenes and and ocean-based landscapes? I like them all and here’s a print with them all rolled into one. note: It was too big to scan so I had to photograph it, which is why it’s so dark in the lower section and not as sharp as I’d like. 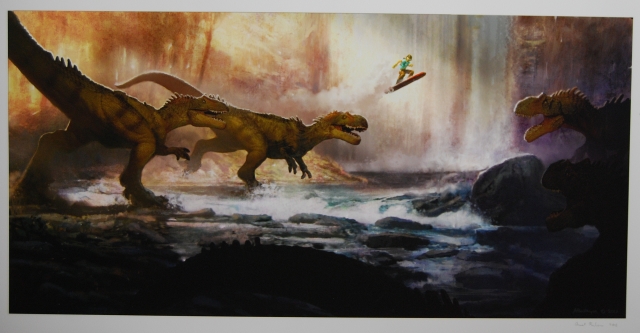 Armand Baltazar – from Diego and the Steam Pirates

This is a scene, also from a forthcoming book, this time it’s Diego and the Steam Pirates by Armand Baltazar, It’s my favorite art from the book and I’m delighted to have a large signed print of it.

That wraps up the SFAL 2 art posts. Several of these either are already framed or at the framer now and due to be ready soon. Then I’ll have the fun of planning where to put them on the walls of the new art-book-reading room shown in a recent post. I also have an electrician coming to install a ceiling can light to wash that wall to really show off the art. Cool.

I’ve enjoyed sharing this artwork with you, and hope you’ve enjoyed it too!