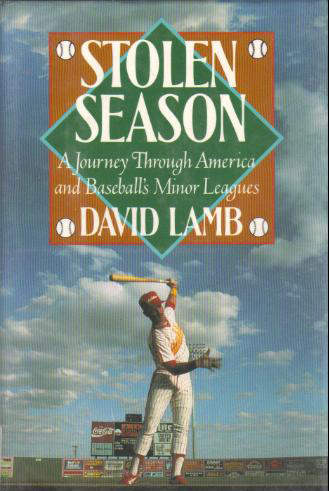 Stolen Season chronicles journalist-writer David Lamb’s summer immersing himself in the world of minor league baseball. Badly needing a break from his job as a foreign journalist in Africa, Asia and the Middle East, Lamb decides to fulfill a life long dream of driving across the country, visiting as many minor league baseball parks as he can.

During this journey, though the baseball games are the intended purpose for the stops he makes, it is his encounters with the people around the country that make this such an interesting book, whether you are a baseball fan or not.

Starting in Stockton, CA, Lamb travels across Arizona, into Oklahoma and Texas, across the south into Florida, then north to visit teams in the Appalachian League, briefly into New England, then west across the Midwest and back to California.  My only disappointment in his itinerary was that he skipped the Northwest League, where some teams I’m familiar with are located. The time Lamb spent with many ex-major league players as well as Lamb’s writing, which sometimes touches on lyrical, make this a very enjoyable book for the baseball fan.

Enjoying life in Portland, OR
View all posts by Rick Robinson →
This entry was posted in Friday Forgotten Book, Non-fiction and tagged David Lamb, minor league baseball. Bookmark the permalink.

8 Responses to FFB: Stolen Season: A Journey Through America and Baseball’s Minor Leagues