We’re leaving in a few hours for San Francisco, and Bouchercon By The Bay, the 2010 version of the long time (since 1970, this is the 40th) world fan mystery convention named after super reader-reviewer-fan Anthony Boucher, pseudonym of William Anthony Parker White. It’s a festival of mystery, authors, fans, books and panels and we’re looking forward to seeing friends from DAPA-Em, the mystery apa we’re in, and others from across the country who will be there (and be sorry not to see many others who aren’t attending this year). 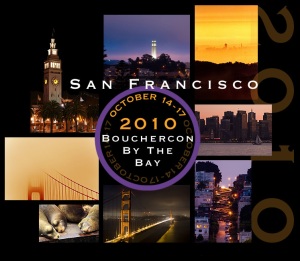 The convention is at the Hyatt Regency so we’ll be near the Embarcadero, and other shopping venues, as well as having access to San Francisco attractions such as Coit Tower, Ghiradelli Square, museums, the Ferry Building, parks and many more.

I usually plow through lots of panels and spend time in the book room and just hanging out at these things, but Wife may well make an effort to preserve her sanity by getting out and enjoying the pleasures San Francisco has to offer.

I probably won’t have time for updates from the City by the Bay, so I’ll see you all here on Monday. Take care of yourselves and each other.

Enjoying life in Portland, OR
View all posts by Rick Robinson →
This entry was posted in Adventure, Personal Opinion, Travel and tagged Bouchercon. Bookmark the permalink.

16 Responses to off to Bouchercon