I made a short list of books I want to read, most from the TBR, to get this year started. That will be in addition to whatever shows up from the library. I just did it to feel organized (we all know how that sort of thing turns out). But for now… 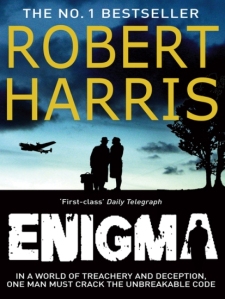 I finished You Can’t Make This Up by Al Michaels, which was interesting but a typical sports autobiography in most ways. I also finished A Street Cat Named Bob by James Bowen, which started out fine but dragged in the middle and I ended up doing some skimming before reading the last quarter or so of the book. Just okay. I also read a graphic novel, Triumph and Torment about a team-up with Doctor Doom and Doctor Strange. Interesting, with good artwork.

Now I’ve started Enigma by Robert Harris, a novel about a young mathematician, Tom Jericho, trying to break the Germans’ “Enigma” ciphers during World War II. He is stationed in Bletchley Park, the British cryptologist central office. The book was adapted to film in 2001. I meant to read this years ago and am just now getting around to it. I have no idea what I’ll read next, there are many options including a novel I’ve been wanting to get to and some short stories, since I have many, many collections sitting here.

Billingham’s The Burning Girl (from the library), and is now reading Jo Nesbo’s Nemesis. Next up for Barbara is The Skin Collector, a Lincoln Rhyme novel by Jeffrey Deaver, which just came in from the library.

What are you reading?

Enjoying life in Portland, OR
View all posts by Rick Robinson →
This entry was posted in Current Reading, graphic novel, mystery. Bookmark the permalink.