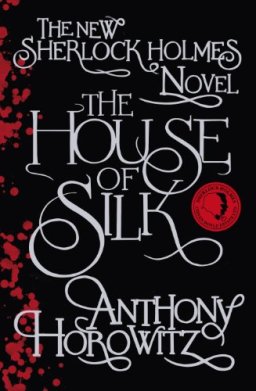 It’s pretty hard for me to resist a Sherlock Holmes tale. I’ve read the canon, many times. I’ve read a great many pastiches, both short stories and novels, some very good, some okay, some dreadful. I believe this is the first I’ve read that was sanctioned by the Conan Doyle Estate.

It’s November, 1890. We find Holmes recovering from days of self-starvation as part of an elaborate ruse in “The Adventure of the Dying Detective.” He had recently solved the mystery of “The Red-Headed League.” His friend and chronicler, Dr. Watson, having wed Mary Morstan, whom he met two years previously in The Sign of the Four, no longer lives at 221B Baker St., but as The House of Silk opens Mrs. Watson has left to stay with friends in the country and Watson has temporarily moved back into his old rooms.

The reader can have no doubt that the game will soon be afoot. The House of Silk begins  with a visit from art dealer Edmund Carstairs, who tells Holmes he feels in danger from a man with a scar on his face, wearing a distinctive flat cap. Carstairs then relates an extraordinary story involving an art theft from a train in America, a Pinkerton investigation and a shootout with a notorious gang led by a pair of Irish twins.

Is the man seen lurking outside Carstairs estate a survivor from that shootout, intending revenge for Carstairs role in the shootout? Maybe. Carstairs then describes his return voyage to England, during which he met and upon his return married an attractive widow, Catherine Marryat. Some of his servants regard her as bringing a needed breath of fresh air into the rather stiff and sorrowful Carstairs household, but his sister is of another mind. Something is clearly amiss. And why does the great detective chiefly want to know if Mrs. Carstairs is able to swim?

Yet this isn’t even the heart of the tale. No, that revolves around a jewel theft, a young boy who is beaten to death, and a secret so dire not even Mycroft can delve into it, and warns Sherlock away. But readers know Sherlock Holmes is not one to give up on a case.

This certainly has the feel of Doyle’s Holmes writings and Watson’s narrative voice. The story has it’s grim moments, but it all comes to a worthy conclusion. This is a good one.

Enjoying life in Portland, OR
View all posts by Rick Robinson →
This entry was posted in Adventure, mystery, Review. Bookmark the permalink.

9 Responses to review: House of Silk by Anthony Horowitcz