New Arrivals
The year is almost half gone, hard to believe time has gone so quickly. This time, an art book, an old mystery, more Holmes, more Saint. 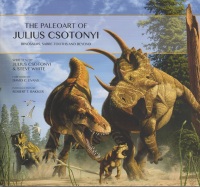 Encounters with Sherlock Holmes edited by George Mann [Titan Books Febuary 2013 trade paper, purchased new] – mystery short story collection. This is one of two original story collections of Holmes pastiches that Titan Books has published. Titan has a very readable series of Holmes novels and stories in print and I have been enjoying the former. Now to try some of the latter.

The Paleoart of Julius Csotonyi by Julius Csotonyi and Steve White [Titan Books May 2014 oversized hardcover, purchased new] – art. When I was a boy, all my friends and I were nuts about dinosaurs. I had and loved the Time-Life book about them and darn near wore it out. I still love them (my wife says I’m still a kid, too) and couldn’t pass this one up. Seems like I’m buying a lot of things published by Titan Books lately.

NOTE: Thomas & Mercer, an imprint of Amazon Publishing, is publishing this new edition of Leslie Charteris’ Saint books. There are currently 20 books available in print in the set. Whatever your “book politics”, this is good news for those who like these stories and would like to have a uniform edition, or for those who would like to try them and don’t want used copies. My only complaint with the following three books is that though they have a foreword and introduction, and even a publication history, there is no table of contents.

Current Reading
After reading three SF novels in a row I wanted someting different so I read Jonathan Latimer’s 1936 novel The Lady in the Morgue which I posted as a Friday Forgotten Book a few days ago. I finished three Sherlock Holmes pastiches, The Will of the Dead by George Mann, The Stuff of Nightmares by , and The Gods of War also by James Lovegrove. Next up will be something for the July 11th special Friday Forgotten Book post on the femme fatale.

Barbara finished Cold Moon by Jeffrey Deaver, a book in the Lincoln Rhyme series that she had missed. She just finished Cop Hater, and says she will read another 87th Precinct novel at some point, but now she is reading Norwegian By Night by Derek Miller, which was strongly recommended by Todd Mason. I’m planning on reading it too.

What new books did you get, and what have you been reading?

Enjoying life in Portland, OR
View all posts by Rick Robinson →
This entry was posted in art and illustration, Current Reading, mystery, New Arrivals. Bookmark the permalink.