ffb: The Lady In The Morgue by Jonathan Latimer 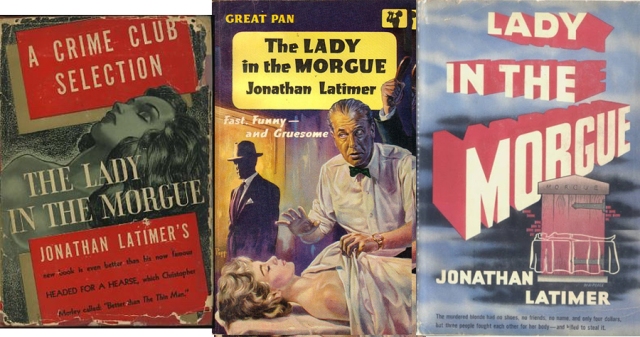 I’ve had this – the edition on the left, w/o DJ – on the shelf a long time, having picked it up at a used book store in southern California long ago. Recently browsing my shelves, I plucked it off and read it in a couple of evenings.

Jonathan Latimer began writing fiction in the mid-1930s with his series of novels featuring private eye William (Bill) Crane. The books combine a blend of hardboiled crime fiction with elements of screwball comedy. The Lady In The Morgue is the third book in the series.

Crane is an operative for the New York investigative firm headed by Colonel Black. In Chicago, an unidentified woman is in the morgue, and Crane has been sent to see if he can find out who she is. The client is afraid the woman might be a missing daughter. While Crane and a couple of reporters are at the morgue, the body is stolen, leading to a hunt for the body and efforts to find out who she is and why she has been taken.

Crane and two other operatives manage to trace the woman’s actions to a hotel where she apparently committed suicide, except the suicide isn’t the woman in the morgue. Eventually there are three blondes in the mix, two of them alive, as well as a million dollar inheritance, rival gangsters who both want the missing body, an assistant D.A. who wants to railroad Crane into jail and some jazz musicians who belt gin and smoke marijuana between gigs.

The plot core is everybody thinks Crane knows something – the location of the missing body – which he in fact does not know, and the head-first, blunder straight ahead approach the detective takes to finding out what has happened are clichés now, but in 1936 they were less so. Still, Latimer gives us a tongue-in-cheek look at the hard boiled detective fiction of the day, but with all of the elements solidly in place, including a twist ending.

Latimer spent many years in Hollywood, writing screenplays, including:

Enjoying life in Portland, OR
View all posts by Rick Robinson →
This entry was posted in Friday Forgotten Book, mystery. Bookmark the permalink.

13 Responses to ffb: The Lady In The Morgue by Jonathan Latimer