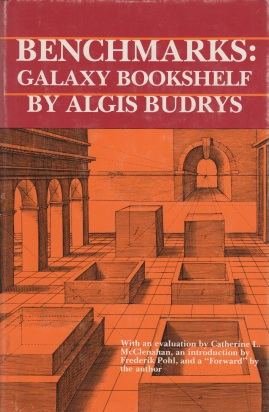 Most of what needs to be said about this book has already been said in the fine review by Todd Mason. I suggest you take the time to read it. What I’ll add is my own impressions, not a deep analysis, more of a reaction to what is between the covers of this book.

From the beginning I was interested, amused, enthralled and finally impressed by Budrys’ expressions of taste or distaste regarding the books he reviewed and the field of science fiction writing and publishing. He states many times in the columns collected here, which are in chronological order beginning in February 1965, that he does not consider himself a critic, nor even a reviewer so much as simply someone who expresses what he hopes is an informed opinion of the books he reads for and includes in his columns.

What a job he does in writing those opinions. Here’s an example from a review of Lester Del Rey’s Mortals and Monsters:

“Del Rey’s world runs deeper and clearer than most, following it’s own course, suffering foolishness but not fools, ignoring the ignorant but not ignorance. In a society of other-directed people, twisting and turning toward today’s chosen practicality, the truly proud and independent man is a marvel to behold. When he chooses to create, his creations cannot help but take on some of that attribute. At the very least, what his stories offer is a refreshing change. It’s up to the reader to provide whatever it is that needs refreshing.”

I’ll give you one more quote, this from the prologue to the second to last column in the book, September-October 1971:

“… It is to be remembered that the itinerant unthreaded pipe salesman knows he has seen a good deal more of the world than the garret genius. It is to be considered that if he has scales on his eyes, perhaps it is because of the scars on his back and elsewhere.”

Now, I may be wrong. But more and more I feel that our bigger thinkers are whistling up their spouts, and I think perhaps I know why. More and more often as I accumulate abrasions in the course of nurturing my own torch amidst the nighted palisades of life do I crave a plain tale plainly told. I do my own damned expert agonizing. What I need from a storyteller is some convincing hint that it’s not all for nothing.  The interesting thing about a well told story for adults is that it requires more experience of life, and more closely observed experience, than do the comparatively easy “heavy” novels whose frequent nature as a formless outcry of one undistinguished ego is disguised behind a hastily worked screen of experimental technique or a dull mask of deliberate pedestrianism.”

To that I say “amen”. I did a good deal of head nodding while reading this book, and also a good deal of searching for copies of books reviewed herein for my own reading, often books of which I’d not heard. If you are a reader of science fiction, especially if you enjoy the works initially published in this time period – and it was a very good time for SF – I can’t recommend this book highly enough. Good copies are available, so don’t deprive yourself of the pleasure of reading this.

Enjoying life in Portland, OR
View all posts by Rick Robinson →
This entry was posted in Friday Forgotten Book, Non-fiction, Review, science fiction and tagged book reviews. Bookmark the permalink.