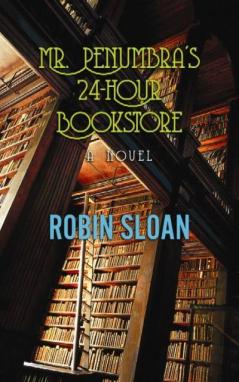 Mr. Penubra’s 24-hour Bookstore first came to my attention through reading a review of it online, possibly on the Washington Post or Boston Globe site.  Regardless, it sounded interesting and I placed a hold at the library. It’s popularity is attested to by the 200+ place I got in line. Since placing that hold I read other reviews, which were mixed, but nothing that changed my mind about wanting to read it. I think it depends on what the reader is looking for. Great literature? No, you’ll be disappointed. A fun book with interesting characters? You’ll probably like it in spite of a couple of weak points in the plot.

Ah, the plot. Let’s start there. Clay Jannon, who has lost his job as a website designer for a bagel start-up, has been looking for a job, any job. He sees a Help Wanted sign in the window of a small bookstore and goes in. The owner, Penumbra himself, asks Clay “what do you seek on these shelves?” The conversation quickly turns to the owner asking what Clay’s favorite book is, and when he says it’s the Dragon-Song Chronicles trilogy, he is hired. Penumbra tells Clay that “prior experience in the book trade is of little use to you here,”.

Thus he becomes the late shift, 10pm-6am, clerk at Mr. Penumbra’s 24-Hour Bookstore in San Francisco. It’s an odd place, and with the exception of a handful of eccentric regulars who borrow rather than buy books, there are few customers and fewer sales. The store has a strange layout: a few regular bookstore sized shelves and behind them, further toward the rear of the store, many tall shelf units, more vertical than horizontal, with ladders leading clerks up into the lofty shelves. The books borrowed by the regulars seem to be written in some sort of code — in one case, as Clay discovers, “a solid matrix of letters”. It likewise becomes apparent that the goal of the regulars is to unlock some code or secret within the books, each leading to another book in the store. Intrigued, and with much time on his hands over the long night shift, Clay tried to solve the meaning of all this, first through simple logic, then by tracking which regular customers check out which books and in what order.

Clay has many unusual, and useful  friends, a computer programmer at Google, a roommate who works at Industrial Light and Magic, a long time friend who runs a small software company.  Each answer to the question “what’s going on?” brings another question, until the hidden brotherhood of the Unbent Spine is revealed, though it’s purpose is obscure. As Clay continues to dig deeper, it becomes apparent there is a master book held in esteem by the brotherhood, and that it may contain the key, if it’s code can be broken, to eternal life. With his friends, and Penumbra himself, he pushes ahead to solve the riddle. So far, so good, and through all of this I really enjoyed reading the book and could hardly put it down.

I enjoyed reading about the bookstore, characters and puzzle in the first half to two-thirds of the book. However, once we are inside the secret library of The Unbent Spine, for me things began to slow down. This is where the process of trying to solve the puzzle using computing power to reveal the “secret” takes place.  I was convinced the whole business wasn’t going to work out, but I had to keep reading to find out, and then find what the author was going to do with that, and what the secret – if there was one – might be.

An enjoyable book if you don’t take it all too seriously. As far as the puzzle, code and so forth, it’s no Da Vinci Code, but then it doesn’t purport to be, and that’s probably good. I have only one complaint about this one. As it weakened toward the end, it almost seemed that the author – or perhaps an editor – assigned a page limit to telling the final part of the story. This is the only reason I can think of for the quick finish followed by a long epilogue at the end, which neatly ties everything up and explains what happened after the final sentence of the book. I’d really rather have had another chapter or two in which the author did that.

Knowing what I know of the book would I have read it? Definitely. This is a book strong on character, location is well drawn if somewhat sketchy in places, there are moments of humor I enjoyed. There seem to be some of the typical first novel problems, such as the story jumping about a bit too much, but overall I liked it. Honestly, my favorite character in the book is Penumbra himself, of whom I wish I’d seen and learned more.

So I suppose this is yet another mixed review, but there is a great deal more to enjoy here than there is to find fault with, and after all, for me enjoyment is why I read.

Enjoying life in Portland, OR
View all posts by Rick Robinson →
This entry was posted in reading, Review and tagged Mr. Penumbra’s 24-Hour Bookstore, Robin Slone. Bookmark the permalink.