Jane, the Woman Who Loved Tarzan 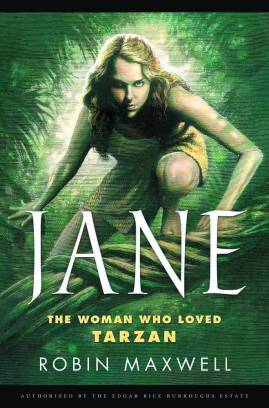 I read two reviews of this, both very favorable and professing the book to be interesting, faithful to Edgar Rice Burroughs, and full of adventure.

The book begins with a prologue. We find Jane awakening in a nest high in an African Fig tree in what is obviously heavy jungle. She immediately realizes she has been grievously wounded, with wounds on her head, arms, legs and back. She is lying in a soft bed of moss with the remnants of her badly rent clothing, under and over her. As soon as she stirs, a man suddenly appears, a magnificent specimen clad only in a loincloth. This creature does not speak, nor understand her weak efforts to communicate, but instead chews and spits into his palm a gooey concoction that he gently rubs onto her wounds, relieving the pain almost immediately. He then gives her a drink of water and as she falls back asleep he disappears over the side.

The story then hops to Cambridge, England in 1910. Jane Porter is a medical student at Cambridge, the first and only woman at that time to be one. She hopes to use her medical and anthropology training, along with her interest in anthropology to become a paleoanthropologist, like her father.

An opportunity to make an expedition into the west African jungles to search for signs of the missing link is irresistible, and her dreams come true when she is invited along with her father by expedition guide Ral Conrath. Africa contains all the joys and horrors she has imagined, but things begin to go wrong when an important member of the group turns out to have a very different agenda than she and her father.

That’s all I’ll say about the plot, the rest should be fairly easy to glean for anyone who has read about Tarzan in the original Burroughs’ books, adaptations, or even the various graphic or film/television versions. The how and where remains for the reader to discover in this one.

Yes, there is some adventure, some effort to rationalize the science of today with the original pulp stories, making it seem plausible, humanize the characters more and a happy ending is supplied. However I felt like I was wading through twice as many pages as need be to get there, the characters, even Tarzan, were no less cardboard than the originals and much of the book, which I slogged through in a couple of days, disappointing over all. This was certainly, for me, not up to the level promised by those reviews, which is too bad, because I thought the idea held promise. For this reader, it was a promise that largely went unfilled.

Enjoying life in Portland, OR
View all posts by Rick Robinson →
This entry was posted in Adventure, books, Personal Opinion, Review. Bookmark the permalink.

8 Responses to Jane, the Woman Who Loved Tarzan