FFB: Where There’s A Will 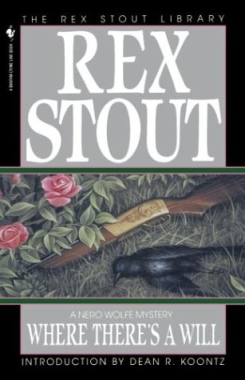 It’s been a while since I read any Nero Wolfe. No reason other than there is so much to read and as much as I always enjoy the Wolfe stories I was focused on other things. But I read Marvin Kaye’s The Nero Wolfe Files, a collection of articles from the Wolfe Pack Gazette, and that fired my resolve to read more Wolfe. This is the oldest, based on publication chronology, that I hadn’t read.

This one started slowly, or rather plenty happened from the first page, but I didn’t much like the clients, their reasons for seeing Wolfe, or any of it. I found myself wishing he’d toss them out, but knew he wouldn’t because Archie has told us the bank account is dangerously low. So Wolfe does something unusual: he takes a case involving a contested will.

It didn’t take many pages before I was fully involved with the story, back in the Brownstone with the familiar characters and perfectly happy to be there. Not unexpectedly a death by accident is found to be a murder, complications arise, the suspects are multiple and motives are rife. A second murder both eliminates a suspect and adds a new one. Classic Wolfe, and I enjoyed every page, even the somewhat abrupt ending. I guess I’ve gotten used to a bit more of an after, more of a conclusion wrap-up. No matter, this was a very enjoyable book and I’ll be moving on to the next in the series that I’ve yet to read, The Silent Speaker.

Enjoying life in Portland, OR
View all posts by Rick Robinson →
This entry was posted in books, Friday Forgotten Book and tagged Nero Wolf, Rex Stout. Bookmark the permalink.

10 Responses to FFB: Where There’s A Will