This is the 29th in my series of Friday Forgotten Books

Katherine Kurtz has written a lot of fantasy, most of it novels featuring Deryni. 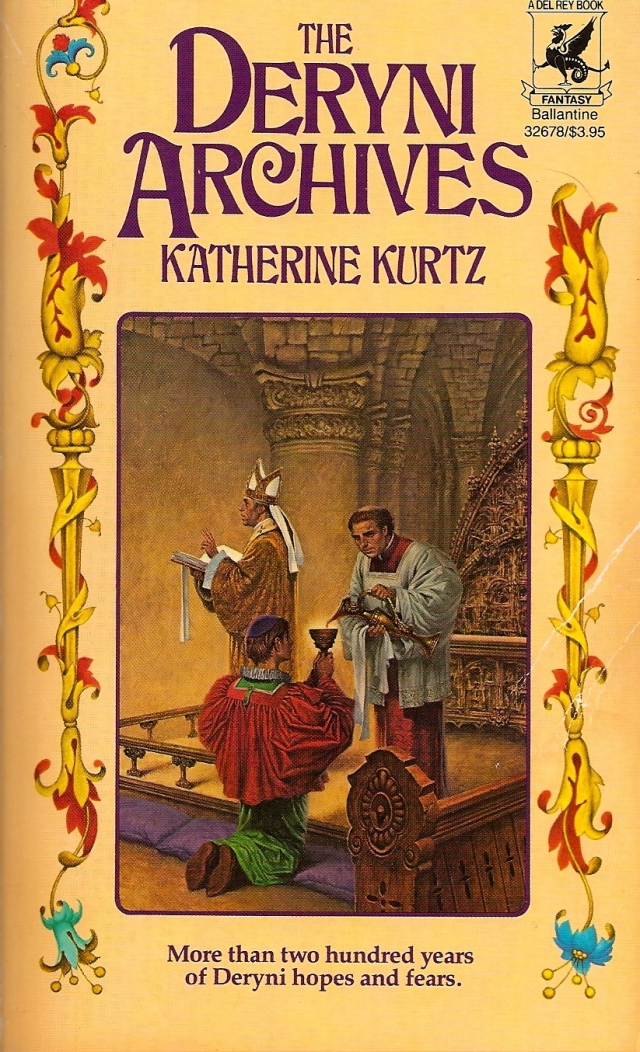 The series is set in the land of Gwynedd, one of the fictional Eleven Kingdoms, and an interesting place it is.

Gwynedd itself is a medieval kingdom similar to those of the British Isles of the 10th and 12th centuries, with a powerful Holy Church (not unlike a medieval Roman Catholic Church), and a feudal government ruled by a hereditary monarchy. The population of the Eleven Kingdoms includes both humans and Deryni, a race of people with natural psychic and magical abilities. Throughout the course of the series, relations between humans and Deryni result in ongoing political and religious strife that is often interconnected with the individual lives of the main characters. While the plots of the novels often involve political, ecclesiastical, and military conflicts on a grand scale, they are counter-balanced by details of the characters’ personal lives. Neither race is depicted as inherently “good” nor “evil”, as both humans and Deryni are depicted as protagonists and antagonists at various points of the series. Additionally, the novels often depict the characters engaging in various forms of magic, and such scenes vary in importance from minor events to significant plot points.

Kurtz has written three trilogies and one quartet about the Deryni race in the kingdom of Gwynedd:

The short stories in this collection take place throughout the times of those series, and the reader not familiar with the books will find some help in the lengthy introductions Kurtz gives each story, setting it in the time period and describing the historical events of that time. In addition there are some very informative appendices giving the timeline and events for the entire set of books as well as a piece on how the author first conceived the concepts.

The stories hold up by themselves and give a good representation of what is to be found in the novels, though naturally the latter contain a huge amount more of plot, characterization, layers and drama.

I read the first two series many years ago and liked them a lot. There is a certain amount of religious trapping to what goes on, part of the spell-casting, and as the titles imply many of the characters are members of the church. There are frequent power struggles between the church and royals. Deryni keep their identity as such, and their special powers pretty much in the background, but at one point in history some arrogant Deryni abused their powers which lead to a war and a Deryni witch hunt. Humans, for political reasons and out of fear, came to consider Deryni instruments of the Devil and to be Deryni became a death sentence, and the members of the race who survived the vicious harrowing went into hiding, hiding their true nature. Over time this changed, but it took centuries. The various series take place at various times during all this.

The publication order of the books is not the order of events as occurred in actual Gwynedd chronology. Kurtz wrote books in groups and then later wrote another set before or after what she had previously done. The best place to start, if you have an interest in reading the entire Deryni series, is with The Legends of Camber of Culdi, beginning with Camber of Culdi.

This is a solid collection of stories, Kurtz is a fine writer. The reader who is interested in epic fantasy without elves, dwarves and dragons, but with strong characterization, involving politics adventure and a very believable history woven through it may well want to give this a try to get a feeling for the writing and settings before beginning with the first series.

The series of Deryni books takes a little effort to get going with, but after 20 pages or so you’ll be pulled in by the characters and intrigue you’ll be well repaid.

Series organizer Patti Abbott hosts more FFB reviews at her own blog,
and a complete list of today’s participating blogs.

Enjoying life in Portland, OR
View all posts by Rick Robinson →
This entry was posted in fantasy, Friday Forgotten Book, reading, Review. Bookmark the permalink.

15 Responses to The Deryni Archives