This was the first feature-length musical score written specifically for a US sound film, and was the first major Hollywood film to have a thematic score rather than background music. 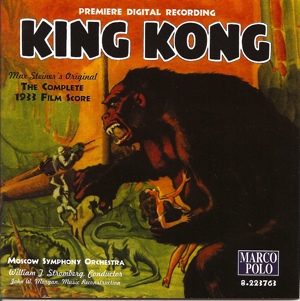 Maximilian Raoul Walter Steiner arrived in Hollywood in 1929 and wrote the music for some 310 motion pictures between 1929 and 1965. Known by his colleagues as the “Dean of Film Music,” Steiner was arguably the most prolific screen composer in film history. His brilliant work on KING KONG was the first important symphonic film score of the sound era and it made Steiner became the “father” of film music

The initial cut of KING KONG was completed, according to Merian C. Cooper’s unfinished autobiography, at a production cost of just over $513 thousand, leaving no remaining budget to cover the cost of an original music score. Cooper was adamant in his refusal to settle for the use of stock library tracks, and so determined was he to commission a completely original score that he offered to pay Max Steiner, out of his own pocket in order to create a distinctly original sound for the picture.

Steiner wrote a huge, dramatic score with depth and complexity. From the moment the film begins with the Main Title and we hear the ominous three bars proclaiming the awesome coming of the great ape, the listener is enveloped in a calculated rise in tension, building to the first hint of arrival on Skull Island.

As Carl Denham (Robert Armstrong) and his crew cautiously abandon the protective shelter of theVenture, and enter the sinister, seemingly barren village, and hear chanting from somewhere near the great wall, towering before their lonely expedition, the music reflects the unexpected, unrelenting dread felt by the expedition. Drums gain in strength until, at last, the pale intruders stumble upon the  spectacle of the impending ritualistic sacrifice of a young maiden to a beast the natives call “Kong, Kong.”

This is a prelude to one of the high points of the score, the unrestrained ferocity and tribal abandon as the kidnapped Ann Darrow (Fay Wray) is offered, in sacrificial rapture, to a raging beast called Kong, and Kong’s approach as the natives hurry back behind their protective wall.

Yet that’s just the beginning of the adventure, and the music. Steiner takes through all the familiar scenes on the island and back in New York, where things go badly awry, and through the final scene, “It was beauty killed the beast”.

After the score was completed, all of the film’s sounds were recorded onto three separate tracks, one each for sound effects, dialogue and music. For the first time in film history, RKO’s sound department head Murray Spivak made a groundbreaking sound design decision – he pitched the effects to match the score, so they wouldn’t be overwhelming and so they would complement each other.

This is one of the finest soundtracks ever written, it’s historically important and it sounds great. This one cannot be recommended t0o highly.