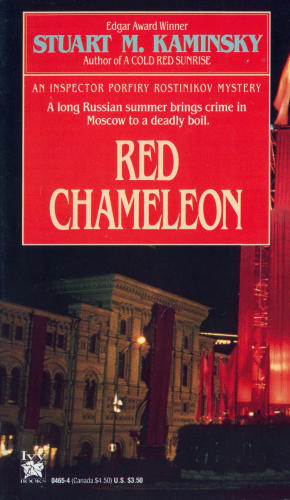 I read most of Kaminsky’s books years ago but recently began re-reading them. I don’t do a great deal of re-reading because I don’t want to go over old ground when there are so many books here waiting to be read, but the Kaminsky books are pretty special. To me, the books are as much or more about about the characters than events, and that makes them stand up well to a second reading. This is one of Kaminshy’s series featuring Russian cop Porfiry Rostnikov. It’s my favorite series and character of the author.

In The Red Chameleon, there are three cases for Rostnikov to either conduct or oversee. The immediate problem is that someone is shooting people from the top of a hotel. Also of concern is an ongoing series of thefts of luxury automobiles belonging to government officials. Of (seemingly) less importance is the murder of an old Jew in his bathtub. But for Rostnikov, no death is unimportant.

The crimes are not linked, it is Rostnikov who is the common thread. Very well written, well-portrayed characters I really care about, straight forward plot. It’s not my very favorite Rostnikov novel, but it’s darn close and it was a pleasure to re-read.

Enjoying life in Portland, OR
View all posts by Rick Robinson →
This entry was posted in Review and tagged Red Chameleon, Rostnikov, Stuart Kaminsky. Bookmark the permalink.